How to fix there is a Problem Parsing the package? The word smartphone and Android have almost become synonymous. Android has become one of the major leading operating systems in mobile phones today. This is due to handsets operating on Android OS are quite affordable unlike the niche market that iPhones and iOS targets. Also Android being an open source, has a large variety of apps, customization, and user friendliness. As a result, users generally prefer Android more than any other operating system in the market.

There is a Problem Parsing the Package – Fix Parsing Error 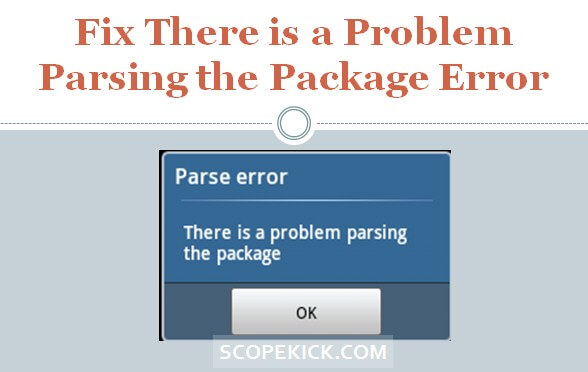 Although Android is the most popular operating system among its users, it has a reputation for being notorious with its error messages and bugs. One such popular error among Android users is Parsing error. This error pops up when the user tries to install any particular app. The screen flashes. There is a problem parsing the package or Parsing Error – There was a problem parsing the package. This error is comprehended among users as the app cannot be installed on their phone.

What is the cause of Parse error in Android?

This solution is directed towards users who like to tinker with app manifests to modify it. If there are certain changes made in the app manifest, the user is likely to face There is a problem parsing the package” error. In order to avoid the error, a user needs to find the Androidmanifest.XML file and restore it to its default state. Also, the user needs to rename the file if it has been modified. If there is something wrong with the app’s code, then it cannot be determined beforehand, and the user might have to take a deep plunge and look into it. The best solution to avoid such problem is to download the app from reliable source.

One of the most attractive features of Android OS is the ability to side load apps. But it is not always advisable to do so for various security reasons. Even Google doesn’t recommend doing it since installing faulty third party apps can hamper the proper functioning of the phone.

So, if a user is trying to install any third party app from a reputed source, and is getting the error – There is a problem parsing the package, all that is needed to do is to allow the permission to install apps from unknown sources on the user’s phone.

This can be easily done by below steps:

Now the user will be able to install any apk he wishes to install by just going into the file manager, searching for the downloaded apk and by clicking on it will trigger the installer and the app will be installed.

USB debugging helps the user to install various apps on his device using a computer and without any notification and log data. This is a bit advanced option and hence is not recommended for all users. It can be done only if Developer Option is enabled on the user’s device.

Enabling Developer Option can be done by below steps:

To enable USB debugging, go to settings then developer options and then scroll down and check the box beside USB Debugging.

Parse error might occur because of various security reasons also. The user might have some Antivirus installed in his device which might not allow the installation of a certain apk. This might give rise to a parsing error. It happens because the antivirus tries to block all files and app installations from any source other than Google play store. To fix this issue, the user can either uninstall the Antivirus completely from the device o he can disable the Antivirus temporarily by force stopping it and then install the apk. In any Android operating device, it is always recommended not to use any Antivirus as they may unnecessarily slow down the device by eating up precious RAM. At the same time, care must be taken on what is downloaded into the device as mobile phones carry much sensitive information, and it must be protected from unnecessary thefts.

Partially Downloaded or corrupted APKs might also give the error – there was a problem parsing the package. To fix this make sure that you have a good internet connection while downloading the app. If an apk file has corrupted, then try to re-download the same apk and then install it.

There may be certain apps which are not compatible with certain versions of Android or might not be supported by the device hardware. It might also need to use certain device hardware like gyroscope or accelerometer which might not be present in the device. All these can lead to the device showing parsing error while installing it. So do make sure to read the app description while downloading the app from third party sites.

Such problem doesn’t arise if the user is using the Google Play store to download apps. As before installing the app from play store, a rough check is run automatically to check for the required software and hardware requirements. Which are not possible for third party websites which provide apk directly.

I hope you found the above information useful and will be able to use it properly to resolve There is a Problem Parsing the Package problem. Hope you got solutions for ‘there was a problem parsing the package’ error. Do let us know if you have any further information regarding this issue. Thanks for reading.