Do you love the old school game and looking for the same? If the answer is yes, then Dreamcast Emulator is an ideal choice for you. We have listed the best Dreamcast emulators for you. The Dreamcast Console was released by the Sega long years ago around 1998 and since then the popularity reaches to the height and reached to the milestone of gaming history. But after the improvement in the technology and tough challenge from the Sony PlayStation. The Dreamcast became the last gaming console of the Sega and since then the Dreamcast lost its market.

The Dreamcast brought the revolution in the gaming world by offering an in-build internet connection, access to multiple players at the same time. It also supports special disk known as GD-ROMs which provides more capacity than CD-ROM. The features of the Dreamcast were outstanding and due to the same, it was highly admired by the gamers. The Dreamcast offered four controller ports through which 4 players can play a game at a time. Since, after the passage of the technology, the Dreamcast has become a good memory. 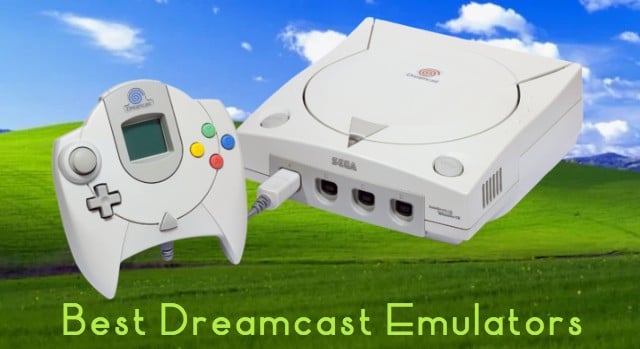 However, if you still want to access the salient features of Sega Dreamcast on your PC, then you will need Dreamcast Emulator. There are the best Dreamcast available online and for your convenience. The list is listed below, but to access the effective features of the Dreamcast, you must have the Windows OS above 7 and a graphics card. These emulators will offer the HD- resolution and ultimate experience of the game. So, get ready to grab the best Dreamcast emulators to feel the true essence of the old memories.

It was known for its speed and accuracy. Being the prominent Dreamcast emulator for PC, it offers an amazing gaming feature due to its compatibility with the Dreamcast games. The features were excellent and widely accepted by gamers. But, in the year 2011, NullDC revised itself with ultimate features and came in the market to fulfill the needs of the users. The new version of NullDC fixes the bugs and is configured with the same code as that of NullDC. The latest version is highly stable and compatible with the games.

NullDC is a Dreamcast emulator for PC which is available on the web which supports multiple Operating Systems such as Windows, Linux, Mac, and Android. So, if you are Windows users, then WIndowsx86 users will get the true feeling of the game. NullDC supports the commercial game and this feature keeps it unique from other emulators. The sounds and graphics of the game played through NullDC emulator give an amazing gaming experience.

This is yet another revolutionary Dreamcast emulator for PC which is high in demand due to its compatibility and graphics. Another feature of the DEmul is the virtual memory card which helps you to save the game. This emulator supports the plug-in system for better sound and spectacular graphics. The DEmul is an emulator which provides an anchor to all the Dreamcast games including the arcades ones such as Naomi 1, Naomi 2, Hikaru and others. Presently, the developers of the DEmul are not giving attention to the emulator and also stopped the support too, but the best part is; it still supports Windows 10 and works smoothly.

If you love to play the Dreamcast game in HD, then Redream is an ideal choice for you. It supports multiple platforms such as Windows, Mac, Linux and much more. This emulator is available at free of cost, but the premium version will cost you and the cost price is only $5. Redream supports most of the Dreamcast game and provides an external controller which enables the gamers to play the game effectively.

The developers are currently active and they frequently update the emulator by resolving the bugs and their effort made Redream a most populous user interface. To play a game through this emulator, you don’t have to configure the controllers, just install the game and enjoy. Redream is one of the best Dreamcast Emulators which supports more than 80% of the Dreamcast games with 1080p or 4k resolution. In short, through this emulator, you will get the ultra edge graphic experience of the games.

Chankast is another popular Dreamcast emulators which provide ample of gaming features and it was the first Dreamcast emulator which supports the commercial game. Initially, the platform provided for gaming was Windows XP and 2003, but it also runs smoothly on Windows 7 and 10. The basic requirements of the Chankast are 256 MB RAM, Pentium 4 processor with 1.6GHz.

Makaron is another popular Dreamcast emulator which supports the Windows Operating System. The key feature of this emulator is the compatibility and graphics, it supports various Dreamcast games and commercial games. So, if you want to get the true essence of the game, then you will have to access the same in Windows OS because no other platform is built.

NesterDC is a Dreamcast emulator which supports all the Dreamcast games. This emulator is unique from others just because of the interactive screen and sounds. The selection screen enables the users to play the game smoothly and it is of one kind in all the emulators. The sound quality is outstanding, especially the background one which boost up the energy.

If you want to get the ultimate and seamless experience of the Dreamcast games in an Android, then Reicast is the best one. The key feature of this emulators is stability and accuracy. The graphics featured by this emulator is great and you are going to love the same. The game runs well in the Windows Operating System which includes 7 and 10. To play the Dreamcast games through this emulator, you will have to install it and no additional configuration is required. So, enjoy the classic game in your Android device.

Icarus will help you to play the commercial game too with Dreamcast games. To get the seamless experience of the game, you must possess the PC which is having a good processor. The features of this emulator are good and loved by most of the gamers. But, a few years back, the Icarus was shut down to offer the latest version with additional features to the users and for the same, the developers are working hard. So, if it is unavailable on the web, then you can get the idea that it is down and you will have to wait to experience the exclusive features of Icarus emulator.

It is the first Dreamcast emulator which enables the users to experience the Dreamcast games. Dreamer is a light-weight application which does not consume the device storage of the computer. Also, help those users who have less RAM storage in the PC. However, the growth of the Dreamer is stopped and currently, it is inactive, but the older version is available and the users can install the same to enjoy the Dreamcast games.

Well, Dreamers has some weak points, i.e. it allows the users to play only demo games excluding the commercial one and the full version of the Dreamcast game is not available. As stated earlier, the developers had put their handoff from the Dreamers, so definitely there might be bugs or issues which can cause issues with the Windows Operating System. But, if you want to get the experience of the first Dreamcast emulator then install the Dreamer by neglecting the weak points. The demo version of the game will let you know why the Dreamcast was popular in mid-2000.

It was one of the earliest game consoles launched by the Sega which supports only Windows Operating System. The features are good but it does not support all the Dreamcast game and provides only the demo version of the game. If you have not heard about the Dreamcast games, then you can go for this Dreamcast emulator to enjoy the games.

However, the best part of the DreamEMU is that the developers are still working on it and very soon, the gamers will get the full version of the game with utmost features of the emulator. So, keep looking in the web to install the current version of the Dream EMU.

It is a spectrum emulator which comes with 200 free spectrum games. It is a unique Dreamcast emulator and differs from the others because of the spectrum factor. The features of the DreamSpec is amazing such as sound, speed, accuracy, graphics and much more which will help the users to access the game efficiently. The best part is; you won’t have to do many configurations in this emulator to play the game and all you need to just burn the CD which composes DreamSpec and boot the same in your computer to avail the free spectrum games.

It is one of the best Dreamcast emulators which gives the optimum pleasure of the game, though the emulator supports Mac and Linux Operating System. So, if you are a Window user, then you can’t access the features of Lxdream. But you can wait because the developers may soon launch the latest version of Lxdream for Windows users.

The features are not much because the developers are still giving their effort, but you can get the basic feature, i.e. it is light in weight and suited for Mac and Linux OS. Well, in this emulator you can access the full version and demo too but the list of games are countable, means it does not support all the Dreamcast games. But, if you are a Linux or Mac user, then you may try this one to recollect your school days game.

So, these were the best Dreamcast emulator which you can download to access the Dreamcast games. Some of the emulators give the HD graphics, some offers excellent graphics. There are other Dreamcast emulators also which gives the entire package and the list of the same are listed above. So, hurry up and download the one which meets your requirement to enjoy the school days game.